During this period of lockdown, Design Inc are continuing to work 5 days a week and all the team are set up to work on creative & digital projects from home providing the same high levels of service and quality as ever.

If you have a creative, digital or marketing project that you would like to discuss, please contact us on: 01784 410380
However, should you wish to contact a Director directly, please use the following:

Design Inc has a pedigree of delivering creative calendar concepts for our clients. We were pleased to continue that trend with the launch of the 2018 Elmar calendar – complete with Augmented Reality on all pages.

This is not the first time that Design Inc have created a calendar for Elmar – a division of National Oilwell Varco. In fact, the last time we designed one for them it was shortlisted to appear at the UK Calendar Awards.

The Creative Rationale
Our underlying rationale behind the creation of the 2018 Elmar desktop calendar was simply to promote the company’s innovative technical and engineering abilities. One of the first things we did was to delve deep into the company’s history and specifically to look at the company’s ‘timeline’ for some major innovative breakthroughs. And we quickly realised that, since the founding of the company in 1981, their breakthrough years also corresponded with major, global technological advances have been made.

For example, the company launched in 1981 – the same year as the Space Shuttle Columbia was launched to establish a new era in space travel.
Two years later in 1983, the same year as mobile phones were first introduced to the public, the company also introduced one of their main products – the 5 Series Control Module. Other examples included GPS(1989), Internet (1993), self-driving vehicles

So, we cleverly linked up the years of 12 client milestones with the major global technological / engineering / scientific breakthroughs of those same year. This led the way for us to easily associate Elmar with global innovation.

Entitled ‘Change for the better: a lifetime of innovation‘, the calendar featured 13 leaves: a conceptual cover and twelve months each depicting a creative image of a global breakthrough. The twelve historic years ranged from 1981 (when the company was founded) through to 2018.
Each monthly page featured both a ‘Did You Know‘ section of text (which introduced the story of the global innovation) and an ‘In The Same Year‘ text (which related to the company milestone story).

Augmented Reality
The design process didn’t end there. As 2018 had been hailed as The Year of Augmented Reality, we decided to introduce an element of Augmented Reality into each monthly page. And, through the Zappar app, we were able to include a ‘hidden’ layer of creative information – a 2 dimensional creative video providing more content on the company’s milestone story.

By simply downloading the Zappar app (which is free and takes seconds) and then pointing your mobile device at each monthly page of the calendar, the page image is quickly and seamlessly transformed to reveal a quick, interesting and education video. The additional of the video as part of Augmented Reality was included to further demonstrate the link between the company itself and technical innovation.

Each video lasts approximately half a minute and showcases text and imagery related to the milestone (which occurred within the specific year associated on the calendar). And to keep the users interested, we ensured that the AR video for each month was only viewable once we had reached that time in the year. So, for example, the AR video for September will only be ‘unlocked’ when we get to September 1st.

The Printing Process
Design Inc was also responsible for the printing and manufacture of the calendar. These were litho printed as single A5 sheets and wiro bound along with a tent card to allow the calendar to stand on a desk. The front cover was further enhanced with spot UV varnish over the image sections.

In addition, we also designed and printed a bespoke envelope for the calendar to fit securely within.

Fulfilment
The project did not end there. We also took responsibility for the fulfilment and global distribution of the calendars – to multiple offices across 13 countries.

To discuss how you can introduce Augmented Reality into your own marketing projects, please contact our Business Development Director, Frank Norman on 01784 410380 or by email. 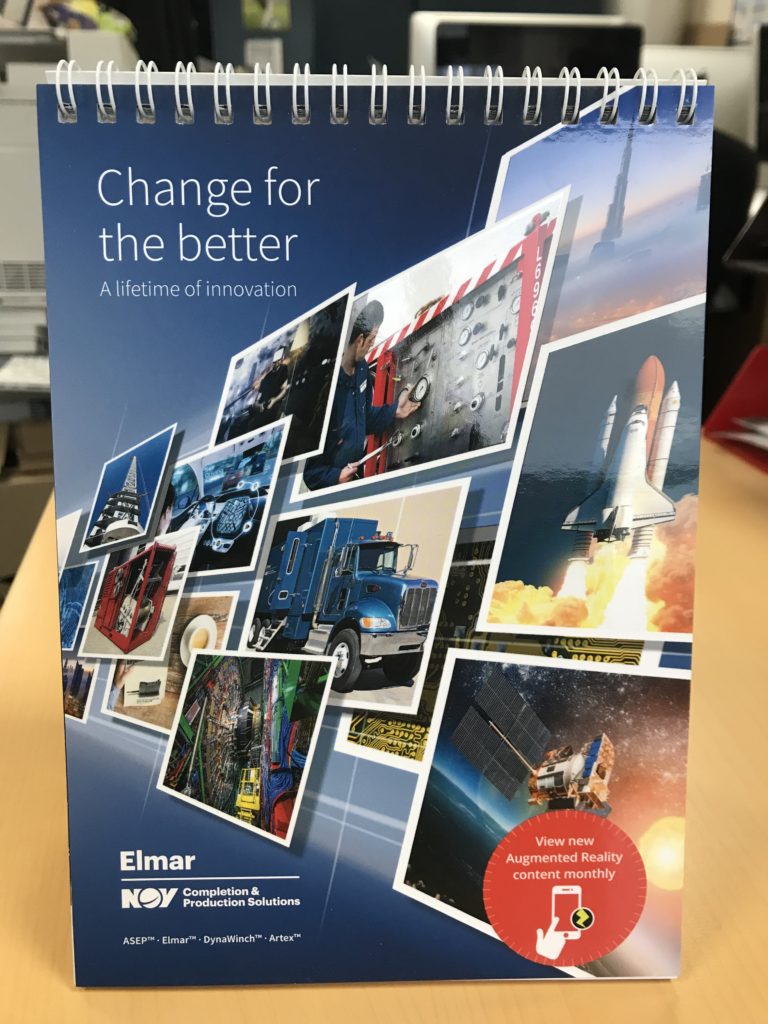 Previous Back to Blog Next