During this period of lockdown, Design Inc are continuing to work 5 days a week and all the team are set up to work on creative & digital projects from home providing the same high levels of service and quality as ever.

If you have a creative, digital or marketing project that you would like to discuss, please contact us on: 01784 410380
However, should you wish to contact a Director directly, please use the following:

Surrey Police approached us to devise a public information advertising campaign for Hate Crime. This needed to raise awareness of the six official types of hate crime, how to report it and show that Surrey Police takes this seriously.

Our creative solution was simple – we needed to strip the design back to basics. No creative or manipulated imagery, no clever or confusing text – just a single person looking straight to camera wearing a Stop Hate t-shirt standing in front of a graphic background that would relate to each type of hate crime. The example shows the version that covers ‘gender identity’ and which was rolled out in time for Surrey Pride.

‘The Business of Opera’

As a direct result of our Meetings Industry Marketing Awards (MIMA) awards win, The Royal Opera House approached us for help with a campaign to advertise themselves as a venue for daytime business events (lectures, seminars, conferences, training, etc).

The venue had never advertised this service before and so we knew we needed to create a statement that this was more than just a room for a business meeting. Instead, it was business at the opera!

With The Royal Opera House being so well known for the creativity we decided to reflected this in the ad campaign. And so, we created a juxtaposition advert style – using the striking and simple metaphor of business writing implements dressed in recognisable theatrical costumes.

Airbus is a leading helicopter manufacturer and, based on our specialism within the sector, Design Inc was invited to pitch for a new global helicopter advertising campaign to be used in traditional printed as well as digital media.
The campaign was to showcase seven ‘categories’ of their range / & service: military, medical, police, business, oil & gas, ‘innovation’ & ‘after sales’. 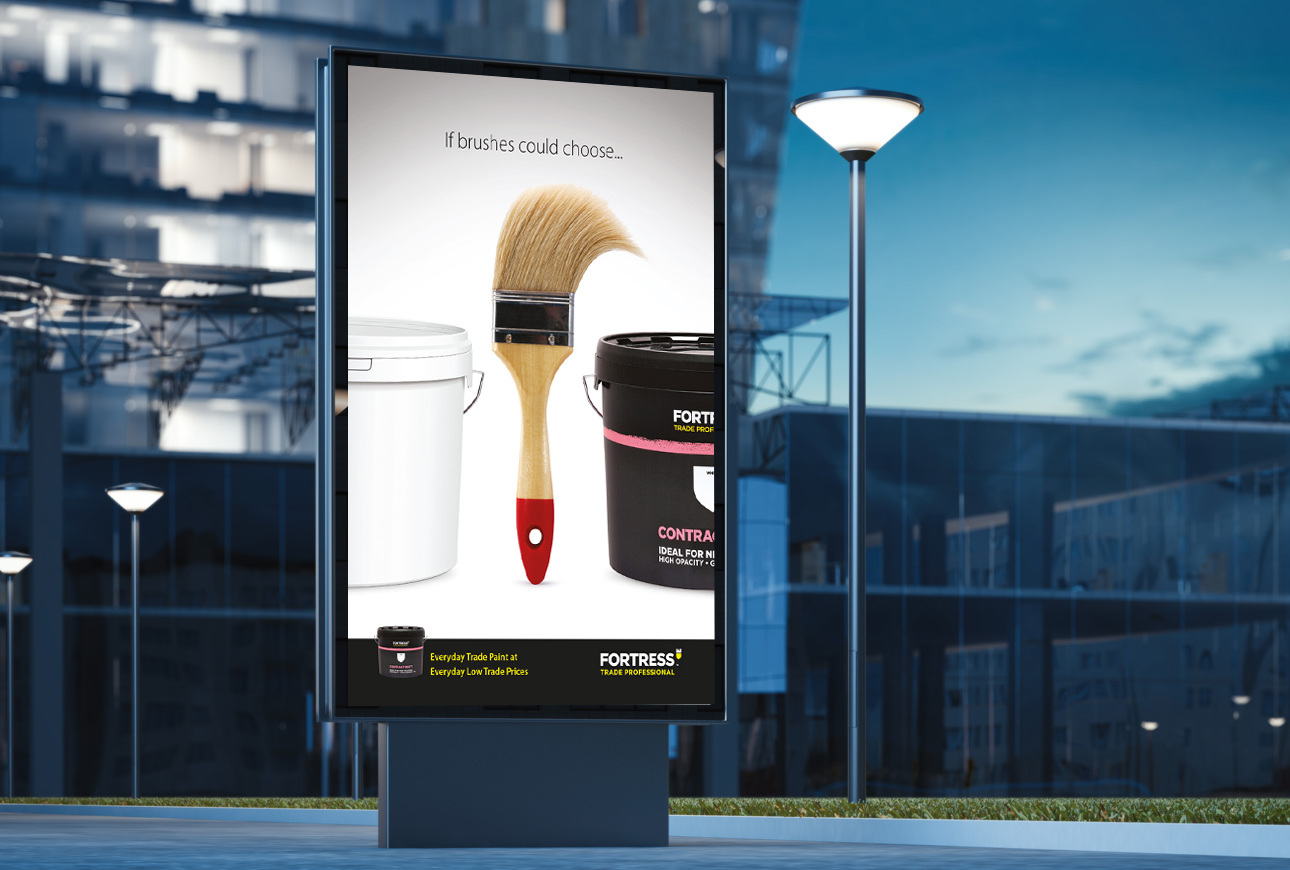 ‘If Brushes Could Talk’

Having worked with JW Ostendorf for many years, we were delighted to get the opportunity to work on one of their core trade brands, Fortress Paints.

Fortress had been known for many years in the trade as a reliable and cost-effective paint range but, wanted to reach out to consumers and get its name more widely known through a period of OOH, store advertising.

The advertisement we created was simple, clever and effective. It showed a paintbrush positioned between two tubs of paint with its bristles pointing / favouring Fortress Paints over the other brand.
Along with the simple strapline, ‘If Brushes Could Talk’, this hit the mark perfectly.

Prior to Farnborough Airport dropping the ‘TAG’ brand, we were approached to create a press advertisement to promote this business airport to travellers across Europe..

Having many business aviation clients based at this location, we were very familiar with the airport and its architecturally-designed buildings. And, we decided to create a fun advert using the iconic images and shapes one would see if they flew from there.

A photoshoot was arranged and images were assembled and manipulated to create a beautiful, symmetrical advert that served to welcome travellers. The advert was then translated and supplied to European media.
Absolutely iconic.

Thistle-Guomon hotels approached us for help in attracting business and social events to their hotels.
A series of OOH adverts were scheduled to appear at rail and bus stations close to their key locations in the UK.

Our job was to engage with the event booking community (booking agents and consumers) and, based on their placement in a fast-moving environment, these needed to be simply yet effective.

Using their point of difference (a much better commission rate of 12%) as the key message, we created a series of food and drink illustrations depicting the desirable benefit of the extra commission, including: the cream in the coffee, the cherry on the top, the icing on the cake, etc.

To further enhance the values of the company brand, a series of print advertisements were created, depicting the power, precision & performance of the eagle.

The main advert shows the eagle perched high up in the clouds, looking out over the landscape. The advert has been created in the two colours of the company brand, with the gold acting as the focus of both the advert and of the eagle itself.

The secondary advertisements showed the eagle in flight soaring above the landscape depicting the company’s core sectors.

‘No Place For Hate’

Nottinghamshire BID approached us to devise a print, OOH & social media advertising campaign to promote their new hate crime ‘charter’ in the city and with a specific focus on the night-time economy.

The campaign featured a series of four advertisements, each one depicting a different aspect of enjoying a night out in Nottingham: Drink, Food, Entertainment & Travel.

Each advert featured the core message ‘No Place for Hate’, and placed on a relevant background. The lead advert (drink) depicted a beer pump with the words acting as the beer brand name. The other designs showed a menu, drum kit and travel card.

When MVP Travel launched as a niche travel agency, providing sports based holidays to the US, they knew they wanted immediate impact with their advertising and approached Design Inc for help in the creation of a series of advertisements promoting three key sports: American football, basketball and baseball.

The agency had established three subsidiary companies to help break into the US sports tour market: Touchdown Trips, Homerun Trips & Slamdunk Trips and, our job was to create an advert for each – each one needed to portray the excitement and experience of attending the game.

Our creative solution was to create an colourful montage of jubilant & passionate fan & player imagery all encompassed within the outline of the team player.

‘Night on the Town’

City Diamond Exchange is a jewellery investment company. Having recently established a new brand for the company, we embarked upon a series of print advertisements to appear in a number of specialist publications.

Along with royalty-free imagery, a dedicated photoshoot was set up to create beautiful, elegant & sophisticated imagery which would reference a HNWI lifestyle for the advertising. Images included environments such as embarking a luxury car, walking onto a private jet, entering a casino, going to dinner.

The advertisements appeared in specialist publications including Autosport – which led to the client sponsoring their awards evening. Read about the awards evening.

Rock Flow Dynamics needed an advertisement to appear at 20 different locations in and around Nice Airport. Overall, there were 14 different sizes and formats required (digital screens well as large format print).

The advertisement was to compliment the company’s presence at an exhibition in nearby Monaco. And, due to its proximity and the fact that the product’s own values were Performance, Speed & Technology, we created artwork depicting a Formula 1 theme.

Drom UK are a leading supplier of high quality saunas, steam rooms and spas. Having supported them on previous creative projects we were asked to design a series of advertisements that would demonstrate the quality of their range.

Our solution was simply to create the advertisements using a single creative & powerful image of a person using the product. A photoshoot was arrange and models booked and this provided us with more than enough great content to select from.

Three core adverts were created, each to focus on a different feature of the build
Refined:  elegant style & form
Defined:  high attention to detail
Designed:  designed around the consumer’s needs

‘Blink of an Eagle’

A long-time client, Cairnhill Structures, recently purchased a new touch-screen vending machine for their headquarters in Scotland. One of the features was that it allowed a video advertisement to be played once someone approached the machine. And so, the client asked us for help in the creation of the video.

Looking at the spec of the machine, we found the advert advertisement needed to be no longer than 20s in length and was to be silent. And so, taking inspiration from a recent print advertising campaign which featured an eagle (the company’s brand), we set about creating a ‘Game of Thrones’ style advertisement of the eagle soaring over snow-capped mountains.

And, coming to rest, high up, the video ends with an effective blink of the eagle’s eye.

Victory Services Club is the only London-based military to offer membership solely to Service and ex-Service personnel and their families. The venue offers spaces for private events as well as for accommodation.

They wanted a new advertising campaign to create additional awareness and to increase both footfall and membership numbers.

Our solution was to create a series of adverts to promote the fact that they offered so much (more than you would expect). The designs featured military personnel experiencing the ‘supersized’ food & drinks. This included images of soldiers jumping out of a helicopter to scale down a pint of beer or their children clambering over a dessert.

Global Motion are global transport specialists for the music and entertainment industry, especially band tours & festivals. So, when we got the chance to support them with the creation of their brand advertising, we were both delighted & excited.

Not only were the adverts booked to appear within specialist music / touring publications, but the company also wanted them to be eye-catching enough to appear on some of their vehicle fleet.

Four adverts were created, each promoting the fact the company is the sector leader. The creative designs featured colourful imagery of items you would see being used by those who go to gigs: lanyards, wrist bands, pin badges and gig tickets. And, upon them, we added the band’s / artiste’s brand logo.

When Surrey Police approached us to create a public information advertisement campaign to be rolled out in time for Burglary Prevention Week, we knew this was an opportunity to create a point of difference rather than showing the more common style of advert: a broken window or door, a ransacked house, etc. Typically, burglary prevention advert focus on the potential loss of possession.
However, we wanted to show that it’s not just the possession that are affected but also the victim’s mental state too.

Our creative works to combine both aspects; the physical and the emotional and shows a distressed woman with a house as her brain with the message ‘Burglars mess with your head not just your home – don’t let them in’.

SFL are a leading consultancy providing integrated solutions to pharma, biotech and medtech companies. They approached us to create a single large format, OOH advertisement to appear in a travelator corridor wall at Basel Airport.

We found that the advert would be 6m in length and that the passengers would be walking past quickly from plane to passport control. As such, we needed to design an advert that could give most impact within the shortest space of time.

Our solution was to design an illustrative advert and one with was orientated to follow the passenger in the direction of their travel. A single line drawing was created that served to join up the company’s four key services.

Design Inc is a creative advertising agency based in Surrey, UK. To discuss your own requirements, please contact us now.